I once sat in a seminar where the instructor asked his audience – a group of experienced engineers – a series of simple questions.  On the surface, each question had a quantifiable, “correct” answer.  As we dug deeper, differences of opinion arose and heated debate ensued.

The instructor chuckled through it, as he’d done this shtick before, but left us all wondering: How could this group of experts fail to agree on simple problems governed by basic engineering principles?  We came to realize that many of us had jumped to conclusions, others had ignored subtle cues, and some were applying familiar but inappropriate principles to the problem.

One might think modern FEA software helps today’s engineers avoid such pitfalls.  Unfortunately, the pitfalls are more tempting than ever before, and worse, people rarely even realize that they’ve fallen in.

Take a simple cantilever beam for example.  What is the stress at the root?  Any classically trained mechanical engineer will reflexively reply, “M-c over I!”  It’s trivial to replicate this result in our flashy modern FEA software, but the best and most experienced engineers will ask further questions before blurting out an answer or firing up their software. 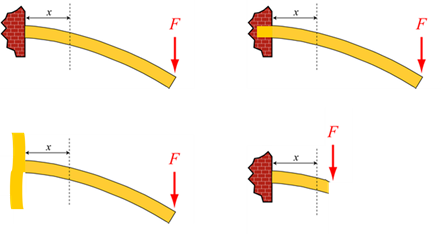 Once you see the pictures and read the questions, it’s difficult to imagine such effects being ignored.  You’d like to think that you’d never fall prey, but it happens to the best of us every day.

The upfront planning stages of a Finite Element Analysis (FEA) effort are critical.  A good analyst will ask lots of questions before they jump into nodes, elements, and pretty pictures.  They may ask about the operating environment, assembly process, design history, etc.  They’ll want to know how and why the loads were selected.  They’ll aim to understand the system and will resist the temptation to assume that they “just know” how it works.

Once the FEA modeling is underway, these same principles must continue to guide the effort.  Two unique catch phrases often come up during project reviews at Mallett Technology:

“Let the model talk to you.”

To capture true physics, no behavior may be imposed on the model that would not occur naturally.  Applied loads and boundary conditions must be well understood and justified.  Part-to-part interactions must be realistic.  Any preloads should be accounted for.  Material properties should be verified.  The model should represent “true physics!”

If the model shows anything unexpected, it is imperative to dig deep to understand precisely why.  Conversely, if the model is behaving exactly as expected, then perturb it and make sure that it responds according to expectations.  Assume nothing and listen closely.  “Let the model talk to you.”

We’ve been surprised on several occasions to discover behaviors in our customers’ designs that even they did not foresee. For instance:

These guiding principles set us apart.  I’m proud to be part of a team that works this way, even though it means that I might get busted once in a while for forgetting the “true physics” or not “listening to my model.”  Our team catches these things during the process and ensures that our customers get the true design insight they need, every time.

Mallett Technology, Inc has been providing mechanical engineering solutions since 1974.

Jason Mareno is a Licensed Professional Engineer with 20+ years of experience. Having a background in product development as well as CAE, he has led product development teams from concept through commercialization for products with volumes of 20 million units and revenues in excess of $4 billion.  He heads up Mallett’s consulting group and is responsible for business development, staffing, and technical excellence/quality.

Mallett is an ITAR Registered Company